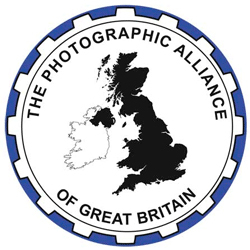 The Photographic Alliance of Great Britain (PAGB) is an organisation that co-ordinates specific activities for photographic clubs in England, Scotland, Wales & Northern Ireland. It does this through 15 geographical regions known as Federations.

The PAGB organises national competitive photographic events for its Federations and for clubs. It also offers other services such as Recorded Lectures to clubs and its own photographic Distinctions known as Awards for Photographic Merit (APM's) direct to qualifying club members.

The PAGB has strong links with similar organisations in different countries throughout the world through its membership of FIAP (The International Federation of Photographic Art).

Individual membership to the PAGB is not possible. Access to the facilities described above is via membership of a club that is affiliated to the PAGB through its Federation.

The PAGB is run by an Executive committee whose members are nominated and elected from members of each Federation at the Annual General Meeting each April. This executive meets three times per year to discuss and arrange the events and matters related to the PAGB.