Welcome to the website of the
​North & East Midlands Photographic Federation
Latest News
Last updated on 18th January 2023
Click here to view the latest newsletter and past issues
N&EMPF Inter-Club PDI Championship 2023
After two years of CFH (Competing from Home) we now feel that we able to compete in person, we hope that you agree with this decision and look forward to seeing you all again.

The purpose of the competition is two fold – to find the Champion N&EMPF Club, and the two clubs to represent the federation in the PAGB National PDI Championships at Warwick University on 15th July.

The competition will be held at Arnold Leisure Centre, on Sunday 5th March, starting at 1.45pm and there will be an admission charge of £3 to cover expenses.

​The AGM is at the same venue in the morning and admission to that is, of course, free.
N&EMPF Inter-Club PDI Championship Invitation, Rules, and Form 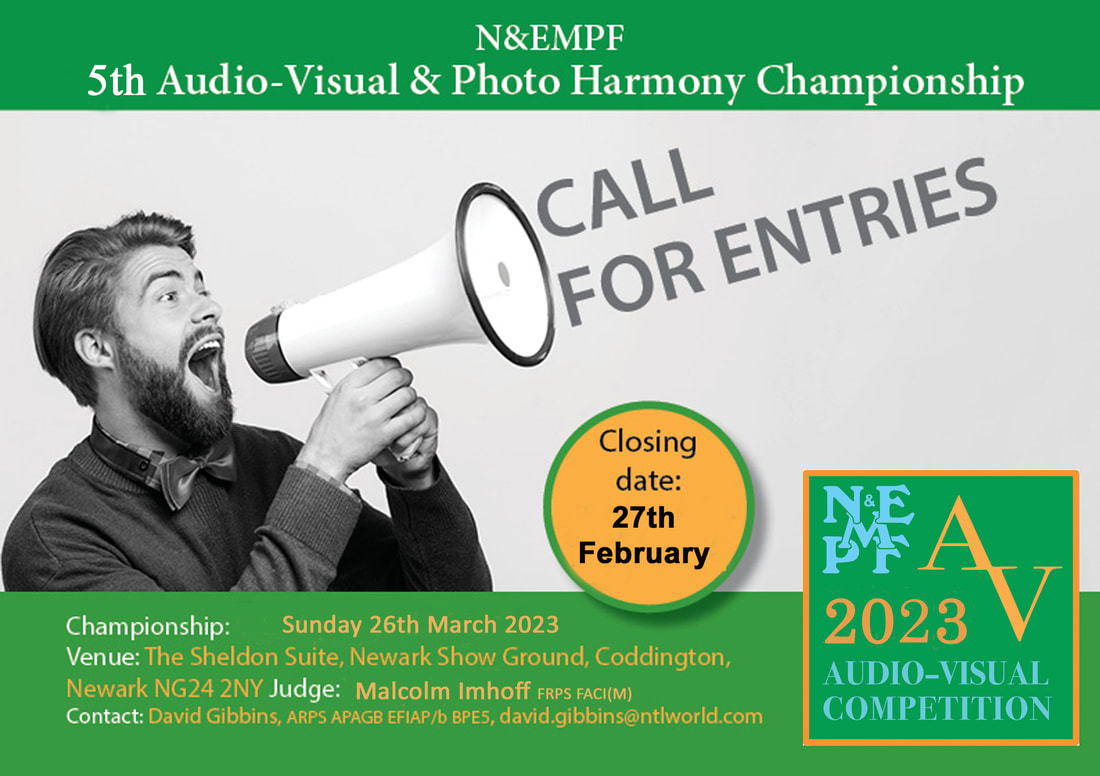 Mansfield Museum is open Tuesday through Saturday,10am to 3 pm — Free entry — but closed Sundays and Mondays, and also 11th and 12th January.
N&EMPF Exhibition 2023
Selection took place on Saturday 29th and Sunday 30th October and awards will be presented at Patchings Art Centre, Oxton Road, Calverton at Noon on Saturday 7th January 2023, where the exhibition shall run until Saturday 11th February 2023. Please note that the centre is only open 10am–4pm, Wednesday through Sunday.

This year 613 images by 193 entrants were accepted out of 2,689 submitted by 300 members of 39 clubs/societies—with every club gaining at least one acceptance and some many more.

​There were 2–3 times as many entrants and entries for the PDI forms of each class as for the Print forms.

The individual medal winners were:

The winners of the club trophies were:

Full results are available here.
PAGB Inter Club Projected Digital Image Championship 2022
This Open competition is held each July and each federation nominates 2 clubs to take part alongside the finalists from the previous year.  This year it was judged with an audience of about 200.

There were 35 clubs taking part—the 3 who represented N&EMPF this year were Bolsover CC, Nottingham and Notts PS, and Rolls-Royce Derby PS.

After the qualifying rounds Bolsover CC were in 15th position, while Nottingham and Notts PS were 6th and Rolls-Royce Derby PS were 2nd—taking both of them into the final round which, including ties for 8th place, featured10 clubs.

Rolls-Royce Derby PS went on to gain equal 1st place in the final round, tied with Wigan 10 Foto Club, 9 points ahead of Nottingham and Notts PS who took 3rd place. Bolsover CC came 8th in the plate competition, a credible 18th overall.
​
Congratulations to all three clubs.

Please click here for more information or click here to see images.
PAGB Inter-Federation Print Competitions 2022
This competition was judged on Saturday 18th June by
As a transitional arrangement the competition was for prints only in three categories: Colour, Monochrome, and Nature.

Special congratulations to Gillian Young AFIAP DPAGB BPE4* PSA4 who received a PAGB Ribbon for her image 'Overhead Reach'—one of only 10 awards (Best, three selectors choice, and six ribbons) in each section.

Congratulations also to the four members from N&EMPF clubs who had work accepted:
Nature Prints
Congratulations to The Lancashire and Cheshire Photographic Union who came first in this section and to The Midlands Counties Photographic Federation who tied with N&EMPF for second place.

Congratulations also to the six members from N&EMPF clubs who had between them seven images accepted:
A massive thank you from the Executive to everyone whose images were retained for the Inter-Federation Competition.

Full results are available on the PAGB's website page for Inter-Federation Competitions.
Congratulations to Ian Taylor on being honoured with the APAGB
Nominees for this award shall have given meritorious service worthy of national recognition over many years.

Ian was taken by surprise when it was announced and the certificate presented to him recently by Dave Gibbins at Nottingham and Notts Photographic Society.
​​
We were all delighted to learn of this recognition for all the dedicated work spanning many decades that Ian has done for the federation, his society and in support of many other clubs and we send him our sincere congratulations.
N&EMPF Inter-Club Print Championship 2022
Many thanks to all of the clubs who entered this Print competition which took place on Sunday 15th May.
​​
The winner's trophy went to to Rolls-Royce Derby PS; congratulations also to Deepings CC who came second and Beeston CC who came third, with both joining Rolls-Royce Derby PS at the PAGB Inter-Club Print Championship this year, which shall be held at Westholme School in Blackburn.